What Is This About?

In October 2014, I attended my first ever PHP Conference which was at PHP North West in London / Manchester. But few of you actually know that this whole thing was magically made possible because of The PHP Community & it’s valiant members. #CommunityGivesBack

Back in early 2013, I had a dream (during my sleep) that I was talking with Michelangelo and also Cal Evans at a conference. I remember I even tweeted about it at some point.

That dream haunted me for a whole year. It haunted me even more when Cal Evans announced that I would be able to attend SunShinePHP in feb 2015 – this announcement was made LIVE on a NomadPHP session and is on YouTube here!

Each week, while drafting a 7php blog post, I was eager to be there at a vibrant PHP Conference. I feel so stiffed here on my island without those excitements and those things that passionate me.

I feel an urge to mingle with the community guys and to be part and parcel of the PHP Community. That is one of the reason I created 7PHP.COM, to bridge that passion in me and to stay as close as possible with the PHP Community, despite being so remote (and may be alone) on my small island.

I say alone because in Mauritius I’m yet to come across passionate PHP guys, as most of them here are just work-oriented / gain-oriented – no real sharing attitude. (If you are Mauritian and is reading this, please shoot me a message!) But that’s something I’m looking forward to change, not doing it right now as I have still things to settle in my life presently.

That Dream Came Into A Concrete Reality!! Magical! 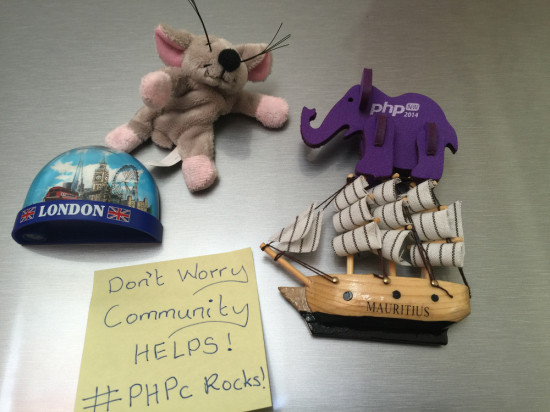 Fast forward to now (Oct/Nov 2014), I am delighted, amazed, humbled, honoured and very thankful to The PHP Community as I have been able to attend a PHP Conference!!

And that conference was PHP North West 2014 at Manchester / UK. I don’t know for you, but for me it’s like one of those most important things in my life. I can’t believe it, I met The Michelangelo van Dam – the green PHP Ninja turtle! I met the perfectionist Jeremy Coates. I met the PHP DJ Stefan Koopmanschap.

I met the prodigious Composer guy, Jordi Boggiano. I met the security Expert, Anthony Ferrara. I met the creator of Xdebug aka Derick Rethans. I met Akrabat (Rob Allen) the author of Zend framework in action. I met the charming Lorna Jane Mitchell who is the project lead of the amazing joind.in. I met the rockstar behind HHVM, Sara Golemon.

Aand all the other PHP Rockstars of The PHP Community (click to read about all that) – a bunch of whom I have had the honor to interview on 7PHP.com.

#CommunityWorks :: Community Has Always Mattered Though Not Conspicuous For some (most people?)

“7PHP is a living example of how community works” – tweeted @skoop – who I also had the honor and pleasure to meet in person. So why did he say that and how did I even went there in UK/Manchester to attend one of the most privileged and quality-oriented PHP Conference?

Me, a simple guy, who lives on a small island in the Indian Ocean, how?

That Month September 2014 – Redbox Digital Came To Me..

That end of month in September 2014, a UK-based company named as Redbox Digital – a Magento Gold Partner confirmed they are keen to hire me to help set up their Mauritian local branch on my island and that I will need to come to London quickly (quick as in the next 2 weeks’ time).

I’m thankful to my CEO and Director Mr Jonty Sutton for having believed in me and for offering me such an opportunity. I’m also very thankful to my CTO Steve Desmet who brought me to the attention of Jonty.

So all that being in itself such a great opportunity, also gave rise and opened up another opportunity for me instantly – I was blown away..

That Day! Michelangelo Opened Up ‘that’ Another Opportunity To Me..

That day, I announced this happy moment (I got a new potential job + going to UK) to my wife obviously. Also, I had actually never been out of my island Mauritius prior to that.

After that, I emailed a certain Michelangelo van Dam to share that incredible moment of my life. In this process, I also asked Michelangelo if by chance he would be around London as I would very much be honored to meet him.

Michelangelo responded there would actually be a Conference at Manchester and he would be there.

“I’m at PHPNW14 early October. Do you think you can make it to Manchester? Let me rephrase this: YOU MUST BE THERE!!! Let me worry about getting you a ticket!!!” ~ Michelangelo

You could not imagine the happiness that brought into me at that instant.

Happily and excitedly, I started preparing my stuffs to go to London when suddenly I got down on Earth and realized that going from London to Manchester was not like travelling in my small island from one place to the other.

After looking up for the how-to-do-that via online means, I found out after I would land at Heathrow, I will either need to travel instantly by train to go to Manchester and find an accommodation/hotel to stay or I could travel back and forth from Central London (where Redbox Digital was sponsoring my business trip) to Manchester 4 times – Saturday and Sunday.

Suddenly all that just came too much expensive for my current financial situation and UK’s pounds are far too much for my Mauritian Rupee (£1 Pound = Rs 52 Mauritian Rupees).

That day, I emailed back Michelangelo and told him that I’m thankful for his gift but I will not be able to have the necessary funds to reach there.

We exchanged some more emails together with Michelangelo and Magma Digital. Michelangelo brought the conversation to the attention of Magma Digital as they were the organizers of PHPNW. And one sentence triggered something in me and that was when Michelangelo said:

“I don’t want to be the party pooper and I wish to shake your hand at the conference, but if it’s impossible for you to get there at a budget matching your preferences we might need to face the facts and acknowledge that you might not make it to the conference.” ~ DragonBe

That sentence was powerful to me. I suddenly felt an inner voice inside me saying: “look you came all the way near a conference that you have wanted all your whole life and now that we are extending a hand to make you be there, you are backing-off – so you choose what your path is!“.

Instantly, I went to talk with wife and said: “whatever happens I have to be there, let’s break our piggy bank damm it!”. (In fact, apart from our priceless Mauritian Rupee, I was on a tight financial situation as I just got married some months’ back and took house loans).

“fuck-it, I’ll be there to live my dream because I’m worth it!”. So I forged ahead and bought my train tickets and my hotel accommodation at Manchester Ibis Hotel all via online – full-stop, let’s do this! PHPNW I’ll be there!

And I was! It was magical!

Two days just before PHPNW starts, Emma Parker of Magma Digital announced me that Magma Digital (Jeremy Coates’ company) would gladly like to refund me my hotel expenses. This was again beyond a dream.

But wait there’s one more thing, in2it – Michelangelo’s own Company also said they will want to sponsor my train tickets as well. That’s it: I was really in a fairy tale! Oh My God!!

So to resume:
1) Magma Digital of Jeremy Coates, sponsored my PHPNW tickets AND my Hotel stay which included 2 nights

Now when I look back, had I missed that conference, I would have been sorely vexed.

Michelangelo is someone who just don’t say things in the air, when he told me “YOU MUST BE THERE..etc” – he knew what he was talking about, he knew what I would feel if I did not take action on my own self.

I was there in UK, so close to my dream of being at my 1st PHP conference, it would have been so stupid and so ‘un-elePHPantly’ from me to stepped back – should I have done so. But I’m humbled of the awesome outcome.

THANKFUL TO All Community FellowShip

I’m so much thankful to the following:

1) Redbox Digital for having triggered one part of the equation, that is to bring me to London/UK
2) Michelangelo van Dam / In2It.be for everything AND being the driver/enabler and ‘community father’ to really help me stay focus on my ‘passion & will’ to be in-to-it, to be in-it and to be there!
3) Magma Digital, Jeremy Coates and the whole Coates family (Emma Parker, Sir Ian Coates and Jeremy’s wife Priscilla) for their amazing community-spirit

I LOVE YOU all Community folks, it’s because of you all that this PHP Community is a sense of family, a sense of togetherness, a sense of true communion between PHP and it’s people!

An Inspiration to YOU

If you have been reading all up till here, I sincerely wish and hope that you get inspired and motivated by The power of The PHP Community – That’s the Uniqueness and that’s the magical part of it. That is what sets it apart from any other communities out there. I’m so proud of being part of this awesome community which is The PHP Community.